It’s that time of year again as I head back to the EPCOT Food & Wine Festival and try all the different dishes as we take our “Trip around the World”.  Disney does a fantastic job in keeping with the authenticity of the dishes yet making them palatable for most of the general public that are not that adventurous of eaters.  A few of the same options that I reviewed last year were back again with a few minor changes, but I tried to work in some news ones too.  I always try my top three from last year to see if they were as good, if not better.  Unfortunately, only two of my top three were back again.  Were they as good as last year?  Did they keep their same positions on my list?  Keep reading to find out!

Below I will not feature everything I ate, just my “Top ATE” dishes from 2019, so let’s jump right in and see what I had to eat!

#8 – Flavors from Fire – Steakhouse Blended Burger ($5.25) – Coming in at number eight on my list is this new dish at this year’s festival.  It’s made with blended beef and mushrooms, brie cheese fondue, arugula, and a truffle and blue cheese potato chip on a brioche bun. The burger patty was seasoned nicely and had a little smoky flavor, the brie cheese fondue was smooth and creamy, and the blue cheese potato chip added a little texture.

#7 – Africa – Kenyan Coffee BBQ Beef Tenderloin ($5.75) – Next up at number seven is also a new dish for 2019!  It’s made with chunks of beef tenderloin, sauced and served over a sweet potato and corn mealie pap and topped with a kachumbari slaw. The beef was tender and had good flavor, but I didn’t detect too much coffee flavor. The sweet potato grit cake was delicious and the slaw was crunchy with a vinegar tang.

#6 – Hops & Barley – New Brunswick Slider ($6.00) – While this item is new to us, it was on the menu last year, we just didn’t get a chance to try it. It’s made with slow-braised beef brisket “pot roast-style with a horseradish cream, crispy fried onions served on a potato roll. First bite impressions were that it was VERY beefy, the bun was super soft and very fresh, and the horseradish cream was not overpowering.

#5 – Refreshment Port – Beef Brisket Poutine ($9.50) – Continuing with the theme of trying the newest items this year, this dish sounded interesting.  French fries are topped with a beer cheese sauce, poutine gravy, chopped beef brisket, and topped with crispy onions. This was the most expensive item we tried, but it was also a large portion, so it was perfect for sharing. The french fries were seasoned nicely, the cheese sauce was more like a nacho variety than beer cheese, and the brisket had good flavor, but I thought the portion of meat on it was a bit skimpy.

#4 – The Cheese Studio – Maple Bourbon Cheesecake ($4.50) – Returning once again from last year, this was our first time trying it. A VERY LIGHT and FLUFFY cheese cake is topped with a maple bourbon cream sauce and topped with candied pecans. My wife did not want to try this, said it did not even sound good, yet we ended up fighting over the last few bites. The portion was generous for the price paid. The cheesecake was light and airy, yet had a very good cheesecake flavor. The maple was not overwhelming and the candied pecans on top gave it a little crunch when taking a bite.

#3 – Flavors from Fire – Dark Chocolate Mousse ($3.75) – Once again, this VERY interesting dessert makes the top of my list and hangs on at #3.  While I did not think it looked that appealing, the ingredient list is what drew me in.  It has cayenne pepper and chili powder in it.  The outside looked like a dense sponge cake, but inside it was soft and mousse like.  The bottom layer was chocolate pearls.  At first bite, you taste the creamy chocolate, the crunch of the chocolate pearls, then a few seconds later, the heat from the cayenne pepper kicks in and hits you in the back of the throat.  It was not overpowering, it just surprises you because it’s not something you would expect from a dessert.  The mango did not really make sense, other than for those that don’t like the heat of the pepper to cool it down.  This is one the riskier options at the festival and I think Disney needs to take more risks and get out of their comfort zone more often, because this is spectacular!

#2 – Islands of the Caribbean – Jerk Spiced Chicken – ($5.50) – I LOVE BOLD island flavors. They are spicy, sweet, tangy, earthy, and very fresh, and this dish had all of that.  Moving up to #2 only because there was one dish that was better executed, it was served with a roasted plantain salad and a mango chutney.  Last year it was served with a chicken drumstick, this year they used chicken thighs was perfectly cooked and had just the right amount of jerk seasoning and heat.  The plantain salad had a lot going on and was just delicious!  Disney usually plays it somewhat safe to please the average palate, so I was happy to see that they kept this dish on the menu and once again stepped outside their comfort zone and brought this fantastic dish to the festival!

#1 – Flavors from Fire – Smoked Corned Beef with Warm Crispy Potatoes ($5.25) – Making a HUGE leap from #5 last year to #1 this year, there were huge improvements in the dish that made it my top choice this year!  Pulled smoked corned beef was served over warm crispy potato chips with pickled onions and topped with a beer fondue cheese sauce. Last year, the corned beef portion was rather small, so I was happy to see that they added quite a bit more.  The chips were nice and crispy and were seasoned well.  The corned beef had good flavor, not overly salty or smoky.  The beer cheese fondue was smooth, creamy, and had a slight smokiness to it.  I once again suggested to the kitchen staff that they do a Pastrami version of this, so hopefully they take my advice and take this dish up one more notch for next year!

How much did all this fun cost us you ask?  We were surprised when we got home and tallied up all our receipts.  For everything that you saw in this post with two people sharing each dish, our total was only $73.45!  Last year’s total was $44.50, so we ended up spending $28.95 more this year.  There were enough new dishes this year to choose from and so we tried as many as possible, with only repeating my top three.  Our total for the day, with a tank of gas ($30.00) and parking included on my wife’s annual pass was just $103.45!  I keep thinking that it might be my last year attending since the dishes don’t seem to change often enough, but Disney contacted me and offered two press passes to get into the park, so I could write about it again.  If they offer them again next year, then I’ll just have to take them up on their offer and eat my way around the world again!

Thomas Miller, aka “The Treasure Coast Foodie” and “The Foodie Guy” is big on organic everything and very particular about his butter. He has reviewed over 150+ local restaurants in the last 5 years and is invited by Disney to review the EPCOT International Food & Wine Festival every year. His food photos are devoured by 10’s of thousands monthly on The Treasure Coast Foodie website and as a Google Maps Local Guide, his photos have been viewed over 20 million+ times. His foodie tribe is over 14,000+ people right here on the Treasure Coast. 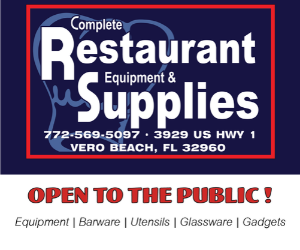